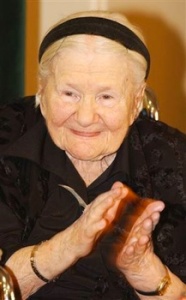 There is another side to this title, but it is not what you are thinking. Let me introduce you to a Polish Catholic named, Irena Sendler. You will almost certainly have not heard of her, but to the Jewish nation, she is a heroine on a par with Oskar Schindler. Her story is both amazing and challenging…

Between the years of 1939 and 1945, she saved the lives of 2,500 Jewish children from the Warsaw Ghetto. How did she do it? She got a job fixing things. This got her into the Ghetto. She carried large tool boxes with her which had false bottoms…Under the tools, there was room for small children…She carried them out in her tool boxes, several at a time. In this way she rescued 2,500 Jewish children from certain death. She forged identification papers and passports, and found shelter for them in homes in Warsaw.

The Gestapo caught her in 1943 and severely tortured her, but she did not divulge the locations of the children. She was sentenced to death, but saved by a bribe being paid to the Nazi officer in charge, who, rather than shoot her, left her for dead, deep in a forest with all four limbs broken. She recovered–and went right back to work saving Jews! What a lady…What a heroine. What an example to us all!

OK, here’s were the rub comes…

In 2007 she was nominated for the Nobel Peace Prize, but passed over for Al Gore’s crockumentary, a very convenient lie…He made almost $50 million dollars from it

The Devil knows his own, but so does The God and Father of THE ONLY SAVIOUR OF THE WORLD, JESUS CHRIST.

HALLELUJAH TO MY LORD AND KING!

If you want a life that is fulfilling. A life that has both challenge and reward. That's tough, but also wonderful. A life that interacts with God in ways you wouldn't believe. A life that sees answers to prayer and bestows on you gifts that you can only get from the Holy Spirit. A life where supernatural peace wins the battle against stress and all the other crud that this world can throw at you. A great life now and an even better one to follow.

Then let me introduce you to Jesus Christ. The Creator and Saviour of mankind. If you want it, say this prayer:

"Lord Jesus, I give You my life. I ask You for forgiveness. Please come and be my Lord and Saviour. Amen."

If you prayed it and meant it, you are now a Christian. Keep a look out for all the things God has for you.
God bless,
Colin.